Just about everyone at Channel Two (according to my inside sources – :)) was shocked when Scott Levin announced he was leaving his position as a main anchor after nearly 20 years.  Scott has accepted a management position at West-Herr Automotive Group. He told me not too long ago that it was time – saying, “It feels so right. Leaving on top to go work for Scott Bieler was a no-brainer. It was time, as you know.” And I do. I know that family is the most important thing. So, if it comes down to making a choice, it really does seem like an easy one.

Scott started not too long after I did. He’s a super nice guy. Very funny. A family man. I caught up with him to see how he was feeling about his upcoming last day, what he’ll miss most, and least, and most importantly, how his wife is doing after her breast cancer diagnosis.

Q: You’re getting ready for your last day at Channel 2, what do you think it will be like?

A: It will be bittersweet for sure. I’ve spent the better part of 20 years here at WGRZ and have made a lot of great friends, and met a lot of wonderful WNY’ers whose stories I’ve had the great honor of telling. I would not be honest if I did not tell you I will miss many parts of my current profession.

Q: How tough was the decision to leave?

A:  It was certainly not a decision I made without a lot of prayer and consultation with my wife and family. It was last year when my wife was diagnosed with breast cancer that really made me reevaluate my work schedule and I knew I needed to make a change.

Q: What will you miss most (besides MAD because that’s obvious) and least about your job?

A:  Obviously I will miss the people the most and telling stories that the community needs to hear… the good, the bad, and the ugly. I will also miss the excitement of breaking news… I always lived for the late breaking on the set breaking news… I always felt that was my best asset on the news desk. As for what I will miss the least… the late hours, and constant stress of having to always be ON… some days you just don’t feel like being on!

Q: You have a beautiful wife and daughters, how do they feel about you leaving?

A:  They were a big part of my decision and they are fully on board… and excited for this next chapter in our lives. 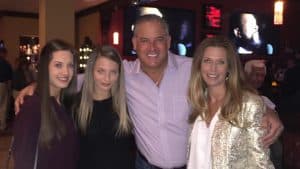 Q: I know you have talked openly about Lisa’s breast cancer diagnosis – and I know your wife is one tough cookie, but tell us how she’s doing? And what it’s been like for you to go through that with her?

A: Lisa is cancer free and enjoying life to the fullest! Anyone who has heard that dreaded “C” word from the doctor knows that your life is forever changed… the entire family becomes a support system and helps the patient through what for many, is the most difficult fight of their lives. We were fortunate, we caught Lisa’s cancer early and had great doctors help us navigate the whole process. It’s amazing too, cancer has a unique way of making many families closer, we are closer now than ever before.

Q: You’ve embraced in here – but when you first got here 20 years ago, things were different, depressing even – have you been amazed watching the transformation of Buffalo?

A: The last five years have been dramatic for sure, I was never convinced that a renaissance would happen here, but now I’ve witnessed it happen before my eyes. Years ago the joke in the newsroom would be… if a developer or politician had a project rendering we showed on the news… you just knew it would never become reality. Now times have changed and a buzz is all over this wonderful city I call home.

Q: Do you have a favorite story that you’ve been a part of?

A: It would be tough to single out just one story… but telling the stories of average American’s doing extraordinary things always get me excited… especially the men and women in uniform, those folks put their lives on the line to protect us, and their stories of courage never get old to tell!

Q: What are you most excited for with the next chapter of life with West Herr?

A: Being a part of a company that has been voted BEST large company to work for in WNY for 13 years in a row! Also being home for dinner won’t be bad either!

Q: This community has really embraced you – what has that meant to you?

A: It’s meant the world, it never gets old when someone stops me and tells me that they love our newscast. I always felt this was home from day one, the people here are simply the best in the nation… and I’ve been lucky enough to travel to 46 states, nothing compares to WNY!

Q: You’re not originally from here, but I know how much you love WNY so let me ask, What makes you Totally Buffalo?

A: What makes ME totally Buffalo? Easy, I always took my job serious, but never myself! I’m a normal guy who wears a baseball cap every day, drives an F-150 and loves spending time with his family and friends. If that makes me Totally Buffalo… so be it… I’ll wear that badge proudly!
I wish Scott all the best in whatever the future holds. 🙂  And, maybe I know where I’ll get my next car. 🙂