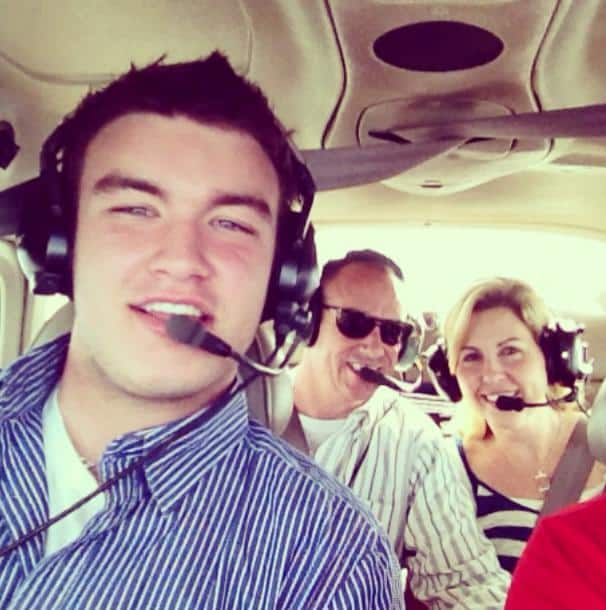 He was just 19-years old – with a big smile, hearty laugh, huge heart and bright future. Paul Englert, Jr. was an all-American kid; a lacrosse player, family guy, and faithful fan of the Georgia Bulldogs. Paul enjoyed woodworking and spending time with his grandfather – who he shared a birthday with. 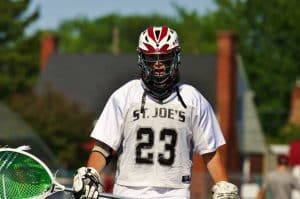 Paul made friends easily at every stage of his life. As a small child,  a student at Clarence Middle School, St. Joseph’s Collegiate Institute and UB where he was enrolled in the Civil Engineering Program. 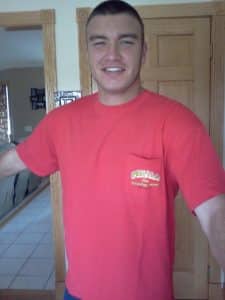 Everything seemed to be going great for Paul. He was happy and seemingly healthy.

But, things changed very quickly. Paul, who seemed like such a healthy guy – suddenly collapsed and died.

Paul passed away from a pulmonary embolism on September 19, 2013 while attending class at UB. His parents were devastated. Heartbroken. They couldn’t quite make sense of it.  How could this happen?

Denise Englert tells me it has become her mission to bring awareness to the disease they knew nothing about; the disease that took her only child, “It is important for people to realize how highly undetected pulmonary embolisms can be and just how common they are. We hope to bring awareness as a result of Paul’s passing so he can continue to help others.” 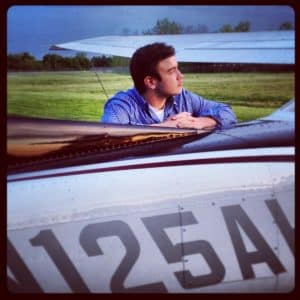 Paul and Denise Englert want to keep their son’s memory alive. They also want to warn others of the risks of blood clots. 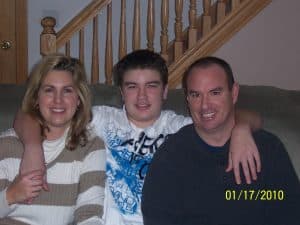 Did you know that one person dies every six minutes from a blood clot? That’s 274 people a day. It’s something Denise and Paul learned in the most heartbreaking way possible, “100,000 to 300,000 deaths from blood clots occur each year, which is greater than the total number of people who lose their lives each year to AIDS, breast cancer, and motor vehicle crashes combined.”

It’s a lesson this family had no need nor desire to learn. They hadn’t been impacted by blood clots; hadn’t even crossed their mind until their seemingly healthy, happy, wonderful son, Paul died at just 19, “Paul was misdiagnosed, but I want to be clear: We DO NOT blame his doctor. While we wish with all of our heart there was a different outcome, Paul did not have enough symptoms to have led the doctor down that path right away. With him being so young it was just not on his radar.”

Denise and Paul want nothing more than to spread the word, warn others, and prevent other parents from living this nightmare,  “We would like it to become more at the forefront in the medical field as an option REGARDLESS OF AGE. A blood clot can happen to anyone at any time without warning. In some cases, the first symptom can be death. Paul’s only symptom was shortness of breath and he was being treated for exercise-induced asthma.” 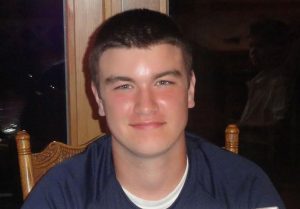 Denise stresses her son was at the doctor’s twice within a week, the last time being the day before he passed away, “We did not realize he had a pulmonary embolism, a blood clot in his lung. He was carrying on with his daily activities, going to school – he commuted to UB for Civil Engineering- work, working on his car. He never really complained about it….I noticed it when he walked downstairs the one day and he appeared to be completely out of breath. I told him this was not normal and he needed to go to the doctor. It gradually became a bit worse or not really improving so he returned to the doctor. Unfortunately, we just didn’t have enough time to figure out the diagnosis.” 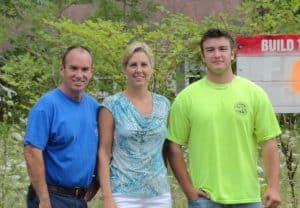 Denise and Paul were surprised to hear the risk factors because Paul didn’t fit into any of the categories, “It is important to us that others are aware of the signs and symptoms, because if caught, they are treatable. A dear friend recently lost her daughter after surgery because she developed a blood clot in her lung. You never know how having this knowledge may help you save the life of your spouse, sibling, parent, child, friend in the future.”

Paul may only have been here for 19 years, but it is clear he left his mark – in many ways.

He will live on in the memories and hearts of those who knew and loved him.

But, there’s more. Others will simply live on thanks to this fine young man.  Paul’s organs were donated. Believe it or not as of January 2015, Paul will have helped a total of 121 people through his donations through UNYTS.  Denise and Paul say their decision to donate was made much easier – thanks to a conversation they had with their son, “This is a very difficult and individual family decision. Fortunately and ironically, a few years before, my husband Paul, and I had a conversation with Pauly, very casually about organ donation. I think it was when he was getting his driver’s license and they ask if you want to be an organ donor. He was in Donate Life club in high school and we were talking one day about what he wanted and he said, ” I won’t need them anymore when I am gone, let someone else have them.” I thank God we had this conversation and I would persuade everyone to, at some point you feel is reasonable, have this conversation. At the time you will be faced with making this decision it will always be very traumatic and difficult. At least we knew without a doubt what Paul wanted. And as I have shared with many, UNYTS does not just take from you. They are there to support you long after your loved one passes. They help to memorialize your loved one, they are available if you need someone to talk to.”

Read more about the symptoms and risk factors of blood clots.

Signs and Symptoms to watch for. 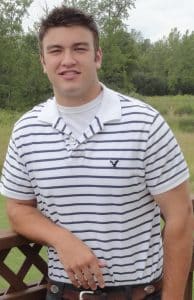 Denise sent a list of ways to honor and remember Paul – she says it helps with her grief.

*Paul attended high school at St. Joseph’s Collegiate Institute where a memorial endowment fund has been set up in his honor and an award is giving out every spring:

“This award was established in 2014 in loving memory of an exceptional young man. The purpose of this award is to recognize an underclassman in attendance at St. Joseph’s Collegiate Institute who is both an outstanding student and emulates Paul’s character. Paul’s legacy is that of a focused student who led by example and was and enthusiastic lacrosse athlete who was dedicated, diligent and determined. Paul was filled with SJCI spirit and was a mentor and brother to all.” (Donations can be made to this endowment fund by sending to: St. Joseph’s Collegiate Institute – Attn: Paul Englert, Jr., Endowment Fund, 845 Kenmore Ave. Buffalo, NY 14223)

* An award has been established at Clarence Middle School (where Paul attended) and is given out at their annual 8th grade awards ceremony in memory of Paul.

* We walk in the Clarence Center Volunteer Fire Company Labor Day Parade every year and pass out candy as well as informational materials about blood clots (The National Blood Clot Alliance) and organ donation (UNYTS).

* An annual blood drive is held through UNYTS every September (the month of his passing) at the Town of Clarence Highway Department in memory of Paul. **Next one to be held on Thursday, September 14, 2017, from 12-5 pm.

* In a collaborative effort with The Perfect Gift (corner of Goodrich and Clarence Center Rds) and owners Deb and Nick Tangelder, we have created The Gratitude Tree, which is set up every year also in September around the 19 (the date of Paul’s passing). Visitors can stop by and select a tag to write something down they are grateful for and place the tag on the tree. It is very healing for others and brings the community together and offers others a chance to think about what they are grateful for. We created this tree, because even though we are dealing with this tragedy and struggle through each day, there is still much to be grateful for. We wanted to give something back to our community who has been there for us with love, prayers and support to show how much we appreciate them.

* In December we set up (also with The Perfect Gift) the Giving Tree. A chance for people stop by and donate holiday gifts to others in need.

* To help us get through the holidays, we have friends and family perform a PEAK (Paul Englert Act of Kindness). They will email us what they did for their act of kindness and we save them all to open and read on Christmas morning. It helps us to get through the day and many others reap the benefit of kindness!

* On March 6, 2016, we held our first fundraiser to benefit The National Blood Clot Alliance and raised $29,180.00! We will be having more events in the future.

* This year on September 19, the Peace Bridge will be lit up in red for The National Blood Clot Alliance. I asked for this date as it will be the 4th anniversary of losing Paul. Just another way to bring awareness.

Add to all of those…

*A Marine run will be held in Washington, DC in just a few months. Jeanne Harber and Inge Flackett will be participating in memory of Paul. For Denise and Paul, this is very special, “This is one of the most sought after races in the country. If by them running in this marathon it creates a conversation about their reasons for participating, it will create more awareness for blood clots.”  (LINKS to fundraising efforts:  Jeanne Harber’s page: Fly HIgh Pauly,  Inge Flackett’s page: Inge’s Run for Paulie)

I can’t thank the Englerts enough for sharing their story. Often times, this is how change happens. Families reach through their grief and find ways to help others and make a difference.

It is clear just how loved Paul Jr. was and is.