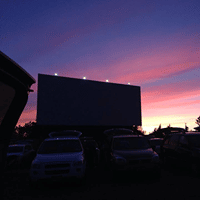 It’s like a David vs Goliath. The local, small business, Transit Drive-In Theatre vs the juggernaut that is Walt Disney.

Here’s what I’m talking about. A post the folks at the Transit Drive-In put out regarding the new superhero movie set to come out this week.

“One of the hardest parts of running a business is making tough decisions, even decisions you don’t necessarily want to make, yet they still have to made. Over the past several days, we have been in ongoing discussions, through our movie buying agent, with Walt Disney Pictures on playing their new superhero movie coming out on May 5, Guardians of the Galaxy Vol. 2. Unfortunately, we were not able to come to an agreement on a deal which we felt was fair, on the basis of industry standards and precedents. To summarize, the deal being offered to us as “take it or leave it” was the highest percentage of ticket sales that we have ever been asked to pay for any previous movie from any other studio, and would have set a terrible precedent for future negotiations on other movies with other studios. It would also have resulted in higher movie rental fees, which would lead directly to higher ticket prices for our customers.”

That stinks. And we love Disney. Still, that’s not cool.

But, here’s the thing. Hundreds of folks took to Facebook in support of the Drive-In. Rick Cohen, the owner of the Transit Drive-In told me it was “very uplifting” to see all of the support.

The Transit Drive-In will always be a special place to me. I can’t begin to tell you how many times I’ve been there. How many date nights my husband and I have spent there. How many times my girls and I have cuddled under blankets, watching movies and eating popcorn and candy. How many times we’ve waited in line on Transit Road, sure we’d be late, but somehow never were. It’s a place that many of us love for a variety of reasons.

So, to see this struggle is tough to see. Perhaps this is why fewer folks are going to the movies. We totally understand their decision NOT to play the movie and we will support them.

Good for the folks at the Drive-In who are fighting back and not just taking it. Instead of giving in, and increasing ticket prices, they said NO!   We say YES, we get it and will make a point to support them even more!