For Mark Fish – it’s been a ten-year wait. Ten years of chopping, slicing, mixing and hoping – but that chili cook-off trophy has eluded the North Buffalo resident for a full decade.

But, it seems persistence has paid off! Mark, his girlfriend, Jamie (who happens to be my niece)  and their crew of friends from Florida finally found the holy grail. The number one. The trophy. The bragging rights.

You guys, this is no joke. The contest – put on by the International Chili Society (yes, there is such a thing) is a big deal. Every year hundreds of ICS sanctioned cookoffs take place. This one – held in Miami – had over 150 entries.

But, the Buffalo folks and their team are on a hot streak. They took the title, the $500 prize, and the promise of the finals in Las Vegas later this year.  The judges secretly taste each recipe and then pick one winner. Mark says, it’s been worth the wait, “I was so happy. Ecstatic, really. This is fun.”

Their secret? They roast all of the organic vegetables before adding them in.  Mark says it’s all about the flavor. No heavy duty hot zing, just a nice kick. 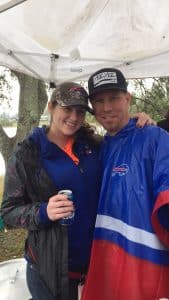 The huge Bills fans tailgate with their incredible chili – so be sure to look for them next year – and ask for a taste! For now, Mark and Jamie are focused on those finals in Vegas.