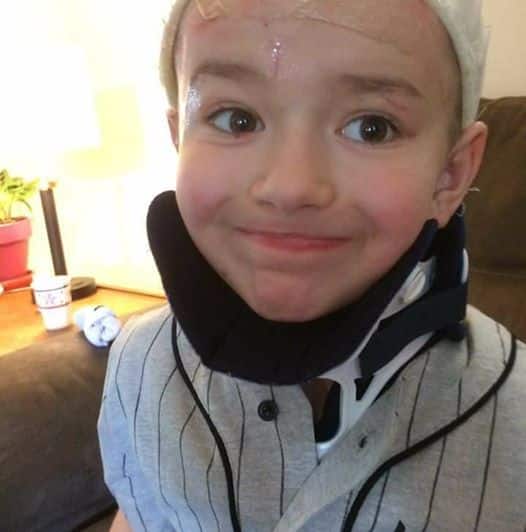 We’ve seen Kaeden’s “happy dance” when he found out he was being released from Women & Children’s Hospital – after being there for one month – now, he’s headed back to the hospital. This time just for a visit.

The little boy, who needed more than 400 stitches and staples after being mauled by two dogs, went home last week. He is still in need of more surgeries and treatment. He has a long road ahead of him – but is recovering.

On Wednesday, he will meet and thank the doctors who saved his life at Gates Vascular Institute and Women and Children’s Hospital. A press conference is set for 11 a.m. where young Kaeden and his family will meet with the staff, discuss the lifesaving techniques and wonderful collaboration between Gates and Women & Children’s Hospitals. The surgeons repaired and reconstructed Kaeden’s severe head, neck and body injuries and also performed the first pediatric stent reconstruction of a dissected vertebral artery in the country. 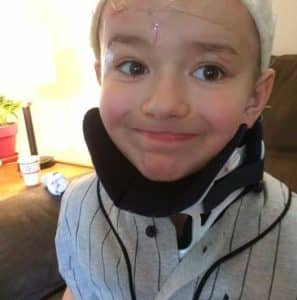 We are so happy to report that sweet little Kaeden Mitchell is finally going home. The 7-year-old has been at Women and Children’s Hospital for one month, has had several surgeries, but is now well enough to go home. The boy was mauled by two dogs and had severe injuries to his face and head. Kaeden has become a little celebrity in the community with so many folks wishing him well. Kaeden will need more surgery down the road and will have to wear his neck brace for the next 6-9 months, but otherwise, this kid is really doing remarkably well considering all he’s gone through.

Even Miss New York went to visit the little guy. Kaeden’s grandfather, Roy Gregory told me not too long ago that his family is overwhelmed with the support and love from so many folks, including the staff at Women and Children’s Hospital. Little Kaeden is happy to be going home and can’t wait to play with his toys. 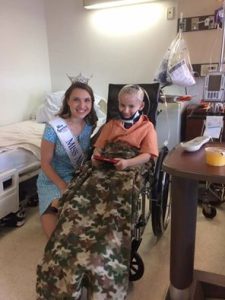 ORIGINAL STORY: The story out of Niagara Falls made us cringe; a little boy, attacked by two dogs, saved by a police officer. 7-year-old Kaeden Mitchell was rushed to the hospital with life-threatening injuries on June 7th after two rottweilers brutally attacked him.

Kaeden was bitten all over his body, but the most severe injuries were to his face and head. Kaeden has hundreds of staples and stitches and has already had two surgeries, with more to come. The little boy, it turns out, is quite the fighter. 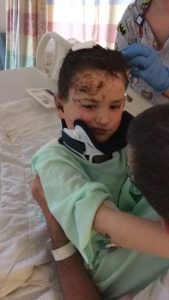 Kaeden’s grandfather, Roy Gregory tells me the little boy is holding his own but still has very serious injuries that will take some time to heal, “He still has an infection on the back of his head, he still has some swelling in the brain when that goes down they’ll be able to close the wounds on the back of his head. He has a neck brace on because he has spinal damage. They have started physical therapy they got him walking he’s come a long way in a week but it’s going to be another six months or so. Children’s already said he’ll be in there probably for a month. Then after he’s released they’re talking several more operations.” 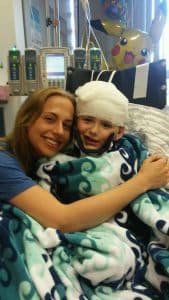 Kaeden with his big sister. Photo courtesy of family

Kaeden remains at Women & Children’s Hospital and is surrounded by family and an awful lot of stuffed animals.

There is a gofundme page for the little boy and his family to help with medical and living expenses while his mom remains off work to stay at the hospital.