The North Tonawnada/City of Tonawanda Swat Team members are pretty amazing, too.

Young Stella – who has been battling leukemia for years – saw the group and asked if she could pose for a picture with them. She thought they looked cool. The swat members – it turns out – think Stella is pretty cool, too 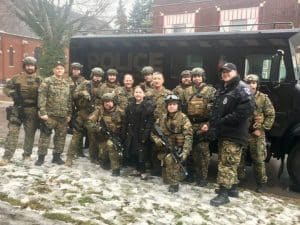 The thing is – this wasn’t just some little girl posing with a bunch of law enforcers.  Not by a long shot. You see, most of those swat members already knew who Stella was. They’ve personally assisted the North Tonawanda family with donations.  Heroes in and out of uniform.  Stella’s mom, Jen – who was with her – told me it made Stella’s day, “She didn’t think they would pose with her but we caught them at the end of their training. Most already knew her and were telling her what a hero she is. They were sweet & kind.”

A little hero meeting a bunch of big heroes – sounds like a perfect ‘caption this’.

Latest posts by Mary Friona (see all)
2017-02-07
Previous Post: ‘Baby Shawn’ continues his brave battle with brain cancer
Next Post: Looking to rescue a pet? How about Ashley!?