So – apparently Shark Girl is offensive. What do you think… 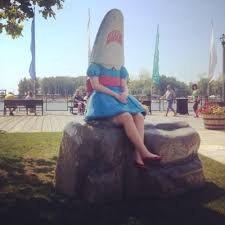 Soooo… my husband showed me this  petition going around on Change.org.  A petition to get rid of the Shark Girl statue that calls Canalside home.

I can’t help but wonder if it’s real or more sarcastic. I’m pretty sure it’s not really an effort to take her down.

Those who started the petition say the statue is offensive and insensitive to victims of shark attacks.

The folks at Albright Knox  are responsible for the statue which creates quite a stir along the water – and is the target of countless selfies. It seemed like everyone loved the sweet statue.

This is how the museum describes the statue:

“Shark Girl is the absurd, hilarious, and bittersweet creation of artist Casey Riordan Millard. While Shark Girlmight appear sorrowful or lonely, there is also a comic element to this “fish out of water.” In Millard’s first public sculpture, Shark Girl patiently waits, legs daintily crossed, hands folded, for a companion to join her.

Appearing in nearly all of Millard’s paintings, drawings, and sculptures, Shark Girl was originally conceived as the artist reflected upon the existential conundrums of life, love, family, and loss. Shark Girl can be seen as Millard’s diversionary tactic or as her mechanism for confronting the challenges of contemporary life.

Shark Girl’s yearnings and desires for normalcy and acceptance trigger equal parts laughter and empathy. The boulder upon which she sits gives viewers an opportunity to bring the work to life by taking a seat and initiating a friendship—or taking a photo—with this bizarre half-shark, half-girl.”

So far the petition has a mere 33 signatures.

What do you think about this? Be sure to comment below!

I wasn’t going to write about this – but it really says a lot about the new reality of our country.

I’m going to hope this entire thing is just someone proving a point!