She was the last runner to finish the Buffalo Marathon, but she wins and so does Buffalo! 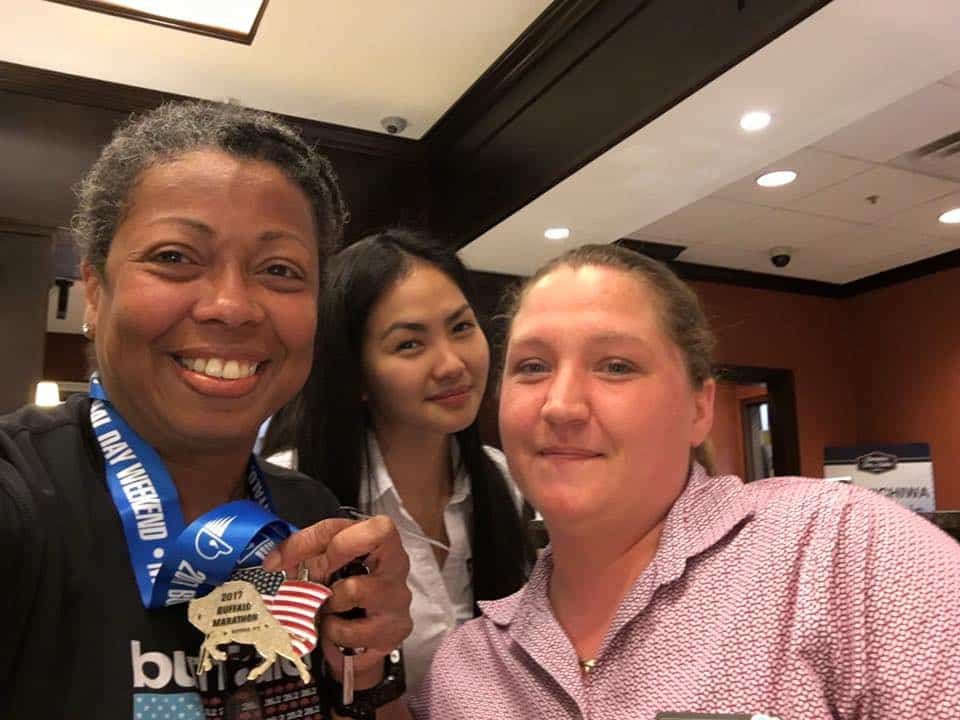 The Buffalo Marathon was a few weeks ago, but when I heard about this story, i just had to share it!

Melanie Eversley came to town to run the Buffalo Marathon. She has family here and has run the race before. I heard about her being the last runner in – and how her spirit and perseverance kept her going despite wanting to stop. Melanie is a winner in my book and so are the folks with the Buffalo Marathon who went the extra mile for one big-hearted lady from the big apple. I got the scoop from Melanie, the now forever-Buffalover.
WHY RUN?
I wanted to run the Buffalo Marathon because as a runner from New York City, I like getting out of town to different places to run races. In 2012, I discovered upstate races and just kept coming north and west for getaways. In 2015, I was recuperating from surgery and getting over an injury from a car accident, and still managed to finish the Buffalo Marathon (I surprised myself). I enjoyed the course and the people. The weather is perfect that time of year — a little cool, usually clear, and the city is so interesting….lots of old architecture, the water, nature, a diverse group of people — all of it kind of inspires me. Plus, I have family in Buffalo. The marathon was to be part of a holiday weekend that included visiting family and just getting away.
THE LEAD UP
My training did not go too well. There were good things but a few bad things too. Just to backtrack, a friend died at the end of 2015 and I really fell into a slump after that. My running suffered too. Also, I’m a caregiver for my mom and work full time. I don’t get a lot of sleep. While others have been getting faster I’ve been getting slower — especially the last year or two. With my training, I was surprised to see how slow I’d gotten, but I did try to be consistent and not worry about time so much and I did feel myself getting stronger. That part was good. The bad part was that my long runs all turned out to be shorter than I needed. Some of that was finding the time. Some of that was just feeling tired. I put in all the same effort and I felt all the same lactic-acid, beaten-up pain, but the mileage was never what I wanted. For the last few weeks, I struggled with the question of whether I should drop out. It was too late to bump down to the half. But I hate to quit so I just kept planning on coming. I knew I was in trouble when the day before the race, I did a slowwwww shakeout run through downtown. I could hardly make it and I could hardly breathe.  I’d driven to Buffalo the night before with my mom and gotten three hours sleep. The morning of the race, I jogged a couple of blocks from my hotel to the start and felt exhausted then. Even then I was on the fence. Who feels tired at the START of a marathon? Usually, your adrenaline and nervousness makes you just want to go. I just wanted to go back to bed. For a moment, I thought about just walking to the sidelines to cheer on everybody else but something in me told me to just try it. What a day.
RACE DAY
I think my family likes the idea that I do this but they are not the type of people to stand on the course and hold up signs or even congratulate anyone at the finish line. My mom is very supportive just not physically able to offer support (I’ve assigned home health aides twice to bring her to the finish line of the NYC Marathon, but it has never worked out in all the chaos). But it worked out (in Buffalo) because the people were so soooooo supportive. I remember even at mile 23 or 24 when I could no longer run, walking past a house where a bunch of guys were drinking beers. One wore a Buffalo Marathon shirt and a medal so I knew he was a finisher. Even HE was encouraging! People kept asking me if I needed anything and made sure I had water and everything else I needed. The support from the city was incredible. That’s one of the reasons I kept going. 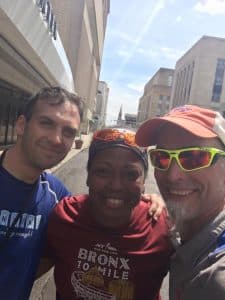 PERSEVERANCE
For the first half of the race, I was tired. Normally I get warmed up by mile 3 and sort of cruise along. Sometimes I get a real surge at the half and have to fight to slow down. I was tired the entire first half. I was taking walk breaks every half mile and running slowly and was still tired. I did get a surge when I saw the winner run by (a Facebook friend of mine). Also, at the half, when I considered dropping out, a volunteer helped me decide to stay in the race and all these folks …. runners and others, were applauding me. That gave me a surge too. I won’t say I felt good, but I felt not too bad from about 13.1 to mile 17.5. Then exhaustion hit again. I’d have a spurt of feeling OK (especially when folks were cheering me on) then I’d have moments where I really wanted to stop. I’m not a medal person really but in those moments I kept thinking, “I want that medal after all this.” I especially felt this way after mile 20. I could not make myself quit at that point. On the one hand I kept wondering if I was crazy and I felt ridiculous, but on the other hand, I just wanted to finish what I set out to do. My Garmin died around 7 hours and 47 seconds and at that point, my distance was 23:91. I have no official time (thank God) because the race officially closed at 12:30 p.m. but I think my time was around 7 hours and 40 minutes. I really don’t want to know. It was terrible. Let’s just leave it at that.
THAT SWEET FINISH LINE
I got emotional at the finish line. The finish line was gone and everyone was packing up. I felt sad that no one was there and that my family was having a barbecue somewhere. I saw an official race vehicle and shouted to the motorist inside and operations director Rich Carter jumped out. He and a volunteer named Al were incredulous that I was just finishing. They asked what happened and I told them about the challenges I have trying to train, and the challenges I had just getting to Buffalo and trying to get even a little sleep. I got emotional telling that. This was my 22nd marathon but it still felt like my first. My races have been getting slower and slower and I have had to work harder just to get to the start line. Not everyone understands that so I contend with judgmental runners and judgmental non runners too. I thought about all of that. Rich and Al told me to touch a spot on the ground to mark my official finish. I bent down to try to touch it with my hand and it was slow going.  They shouted, “No, touch it with your foot!” That was a relief. I was then going to walk to my hotel because my family was having a barbecue and I knew would be asking me where I was (and sure enough, they texted to ask when i was getting there). Rich told me I shouldn’t walk and he drove me there, even though it was only a couple of blocks. He told me to keep hydrating and I thanked him again. When I got to my room, I showered, changed, had to deal with a credit card glitch with the front desk, got my mom dressed and got to the barbecue, where one family member chided me because I’d “finally decided to show up.” It was a strange day but the marathon was an exhilarating experience.
A CITY OF GOOD NEIGHBORS
When I returned from the barbecue a woman named Shane who worked at the front desk of my hotel said, “We’ve been waiting for you.” She and another employee named Brandi stood there staring at me. I thought, “Oh no,” because I’d been on the phone with my bank for 20 minutes earlier straightening out some glitch. I waited for the bad news but then Shane whipped out my medal. I was beside myself and wanted to cry. I could NOT believe how nice these people were being too the LAST finisher! In other races, people at the back of the pack get funny looks, and people accuse you of wasting race resources, but here, people were nothing but supportive. I’m assuming it was Rich Carter who dropped off the medal. Whoever it was told Shane and Brandi to take a picture so he could have proof that I’d received the medal. 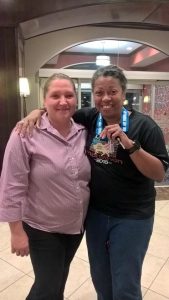 Melanie says she can’t wait to come back next year! She wants to thank the folks with the Buffalo Marathon and the people of Buffalo!!!
Thank you for sharing your story, Melanie!   We love this city and it’s people and we know you do, too. See you next year! 🙂