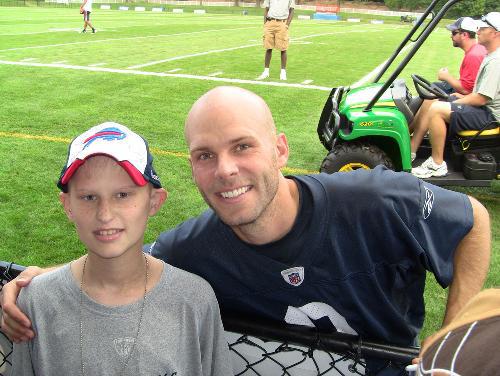 Andrew Pawlak was like any other 13-year-old boy. He loved football, video games, swimming, dirt bikes and snow boarding. He was loving life as a teenager.

However, at the end of the 8th grade, Andrew’s belly button popped out and what was supposed to be surgery for a hernia turned out to be a cancer diagnosis; Desmoplastic Small Round Cell Tumor – a very rare, extremely aggressive form of cancer. Andrew’s mother, Lynn remembers every moment – even now – six years later,

“He had many rounds of chemo at Roswell, then onto Memorial Sloan Kettering in NYC for surgery. There are only 2 doctors who are even familiar with doing this kind of surgery in the US! Extremely complicated! We were there for 5 weeks. Came home for more chemo and recovery. In Aug of 2011, he went into septic shock. In Children’s ICU for a month, they told us he probably wouldn’t survive. He proved them wrong but that month really led to the cancer to grow. Back to NYC for more surgery and radiation. However, by Nov., they said he was terminal. He passed away on Dec 19, 2011. He was so brave, never complaining or feeling sorry for himself.”

Andrew is one of thousands of children who die of cancer every year. His mom recalls her son’s fight,  “He fought bravely for 20 months but the cancer was too aggressive. Our world is shattered. I have two other children that I must make a life for but it is hard,” said Lynn, “Because of Andrew, my cousin Gwen Mysiak, took over the P.U.N.T foundation and continues to run it and assist other families dealing with a cancer diagnosis.” 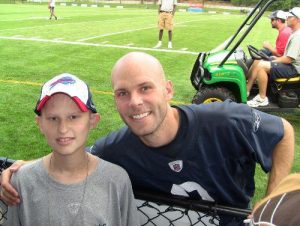 Six years later, Andrew is never out of his mom’s thoughts or heart.  Lynn says her little boy had big dreams,  “His biggest regret he told me was that he was never able to have a family of his own. He has left us all empty and sad forever.”

It is Pediatric Cancer Awareness Month – and I’d like to make you aware of sweet Andrew – a son, brother and friend. A teenager with a big heart. Kids like Andrew deserve more than four. The National Cancer Institute – which controls billions of dollars  and releases a fraction of its resources to specifically help children with cancer is taxpayer-funded – which means that our voice counts. This is why you have to call or write to your elected leaders and tell them to give these children more than four.