Spread the love
Olean is a small town of just about 15,000 people in Cattaraugus County.  It is a quaint town with mountain views, plenty of little shops, even a post office that is on the National Register of Historic Places. 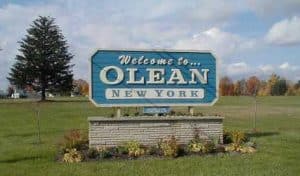 They also have a problem with opioids. Specifically heroin. 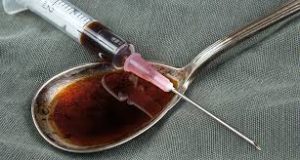 It’s a deadly problem. According to a group called Winning Olean Back – Four people have died from drug overdoses in less than a week in the small town. Residents want answers. And help. I’ve heard from several people who say not much seems to be happening.
Congressman Tom Reed was there recently talking about Russia’s influence on the election.
The Olean Common Council is focused on a new contract that will keep the SPCA as the city’s dog control agency.
According to those I talked with, there is a task force working to get a grip on the deadly problem and the police department seems to be working on things; but there doesn’t seem to be any lawmakers out there yelling and screaming about the problem that is killing people.
Four.  In one week.
Ronda Pletl knows about the problem first hand. Her daughter Katie, now in jail, was missing for weeks.  Ronda was overwhelmed wondering if her daughter, who’d been sent to the hospital from a rehabilitation facility, was dead or alive. Ronda turned to a local group for help and guidance. 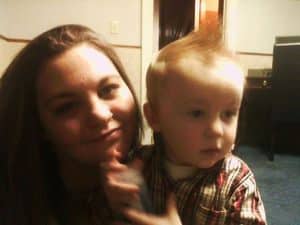 That group has been overwhelmed the past few weeks.  Winning Olean Back is a community group run by Shannon Scott. Their mission is to help get addicts into treatment.  To help get them sponsors. To help bring awareness to the deadly problem running rampant through their small town. Scott says it’s about as bad as it gets in the small town, “I don’t care who you are, what you do or how much money you have, everybody is impacted. Everybody knows somebody. A person struggling, a family who lost someone. Something.” Scott says she knows the families who’ve lost a loved one in the past week. Four of them. Four families living in hell right now. Four families wondering what they could have done. Should have done. Four families too many.
Scott and her group have organized a candlelight vigil to bring awareness and offer support, “People have blinders on. Not my town, not my family, not my anything.  We are trying to help the community, the police, the addicts, the families.”
Experts will be on hand to help those in need.
For Shannon Scott, who is a mother of four,  this is a personal mission that began with heartbreak, “A friend of mine passed away at age 28 last year and left behind two little boys. At that point I said something has to be done.”
Now, she’s laser focused on helping in any way she can. Focused on making a difference. 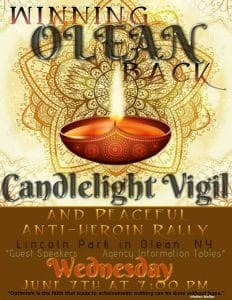 VIGIL: Wednesday, June 7th at 7 p.m.
WHERE: Lincoln Park in Olean
I have a call out to the Olean Police Department for comment on this deadly outbreak. I will update once they get back to me.