My dad passed away, but Alzheimer’s did NOT win. Philip Friona won.

It is pretty much impossible to be a blogger and not blog about losing my father.

I’ve shared his story; his battle with Alzheimer’s Disease and Dementia over the past three and a half years.

This is a bit of both.

I’ve often heard from people who have lost a loved one – that they fear people will forget about them.

I do not have that fear. I don’t think anyone will forget my dad. In his 80 years, he left an indelible mark on just about everyone he met.

As my husband puts it, “He was quite a character.” This picture with the hat on – was taken in February at his 80th birthday party.

My dad has been fiercely battling Alzheimer’s Disease –  the monster of a disease – for a while. He had ups and downs. He’s known us one day, not a clue who we were the next. It’s a merciless disease.

He’s a fighter, but he was tired. 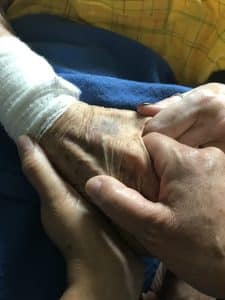 His heart failed and he left this earth peacefully with his family by his side. My sisters and brother and some of our children (not my little ones) surrounded him and shared stories. It was three days of waiting, watching, and praying.

I arrived in Florida on Monday – and my dad was pretty much out of it. He wasn’t waking up. He wasn’t speaking; wasn’t doing much of anything.

At one point, with me standing over him talking to him, he opened his eyes. Oh my God, I was so happy. I told him I loved him and he surprised me by speaking, “I love you too, Mary.”  This is crucially important for two reasons. First of all,  it is a gift to hear that one last time – a gift to be reminded of his love, although I would never need any reminders of that. Secondly, he basically told Alzheimer’s to take a hike, that he knew me in the end – that he knew all of us in the end. All four of us.

My sister Paula took care of dad for the most part. She lived close by and always made sure he was okay.

I don’t want a sad, sappy blog about death. I’d rather focus on the incredible life he lived and provided for us.

I can’t even begin to say enough about Hospice. They are angels from above. The doctors, nurses, staff, and volunteers for Hospice were nothing short of amazing. They not only took incredible care of our father, they also helped my family and I really prepare for what was to come. They were sweet, caring, smart, lovely, and compassionate. I will be forever grateful.

I had an amazing relationship with my father. Before Alzheimer’s took over, we would talk on the phone two, three even four times a day – every single day. Every day. We talked. I loved talking to my dad. He was funny, gave incredible advice, always made me feel special and always let me know that he was just a phone call away.

Two things were most important to my pops – His Country and his family.

He taught me so much in life.

My father raised us. He was a single dad before that was a thing… He did everything for the four of us. I know that wasn’t easy; that he sacrificed a great deal for us. I’ll appreciate that forever. That’s me in the Mickey Mouse shirt – sure looks like four very happy kids to me – and a happy dad, too.

I’m a better mom because of my dad. I know how important it is to create memories as a family. He was big on family. We did everything together.  From vacations to dinners to the movies – we traveled as a pack and it was the best.  My big girls, Maria and Alexa had a very special relationship with their Papa. We spent a great deal of time with him and it meant the world to my girls.

Emma got to spend a good amount of time with him and loves him so much. I’m sad that Ella won’t have that chance, she’s spent plenty of time with him, but he was diagnosed with Alzheimer’s Disease before she was born, so it’s different.

But as it turns out – the only grandchild that didn’t really get to know him is the only one who looks just like him. His spitting image. That is an incredible gift.

I hope what people take away most from my dad’s life is how important family is.

He took us to Puerto Rice to ride horses in the Rain Forest, we went to NYC during the holidays, Bahamas for New Years Eve, the Islands for birthdays, and we watched the sun set together in Key West. I could go on and on. He made life an adventure. That is what he’s left us with and NOTHING is more important.

I hope that is what people take away from this. The significance of memories. Because I can tell you this for certain:  In the end – those memories are all you have. While in Hospice those last few days, nights too, that’s what was most important.

We shared those memories with my dad. We laughed. We cried. We laughed and cried some more. But we never ran out of memories.